This is the Museum of the United Arab Emirates, which tells the story of the country's ancient history. The museum was established in 1969 under the leadership of Sheikh Zayed bin Sultan Al Nahyan, founder of the UAE. It was built to chart the history of Al Ain from the Stone Age through to the foundation of the UAE in 1971. The museum houses artefacts recovered from archaeological sites across the region, including flint tools and arrowheads dating back to the sixth millennium BCE. More...

The Sultan Fort, located at the eastern edge of Al Ain Oasis and within the grounds of Al Ain Museum, is a picturesque and well-preserved mud-brick structure with towers at three of the corners and a gate in the southern façade. The fort was built in 1910 by Sheikh Sultan bin Zayed, the son of Sheikh Zayed the First, ruler of Abu Dhabi from 1922 to 1926. A temporary exhibition was displayed in Sultan Fort from 1969 to 1970 while the purpose-built museum was constructed. The museum was inaugurated on 2 November 1971 by His Highness Sheikh Tahnoon Bin Mohammed Al Nahyan, Ruler's Representative in the Eastern Region. The fort forms one of the major attractions of Al Ain Museum and is associated with the increased influence of the ruling Al Nahyan family in Al Ain from the end of the nineteenth century onwards.

Al Ain Museum is a treasure trove of information on the local traditions and culture that have defined the region. The Archaeology section of the museum includes Mesopotamian pots dating back 5,000 years ago, found in tombs excavated on nearby Jebel Hafit mountain, Abu Dhabi’s tallest peak. The Ethnography section sheds light on the customs and beliefs of the people who have called this place home for centuries.

Al Ain Museum is a great place to learn about the local traditions and culture that have defined the region. The Archaeology section of the museum includes imported Mesopotamian (modern Iraq) pots dating back 5,000 years ago and found in tombs excavated on nearby Jebel Hafit mountain, Abu Dhabi’s tallest peak. This is an amazing opportunity to see artifacts from another time and place up close.

The UAE has a long and rich history of mining and metalwork, as evidenced by this stunning piece of jewelry dating back nearly 4000 years. Found in a tomb in the Al Qattara area, this exquisite example of locally-made jewelry is just one of many fascinating artifacts on display at the museum. In addition to jewelry, dozens of copper and bronze weapons were also found in the tomb, highlighting the importance of these materials throughout the UAE's ancient history.

Situated in Al Ain, the museum showcases a number of large and complete Iron Age pottery vessels from Hili and Rumailah. These artefacts are approximately 3,000 years old and provide insight into the sophisticated technologies used by the people who inhabited Al Ain at that time, including the falaj (traditional irrigation system) which was used to irrigate the oases. Several of these ancient falaj have been excavated by local archaeologists and, along with otherfalaj in the UAE, they represent some of the earliest evidence available for the widespread use of this innovative irrigation technology. Thanks to this technology, Al Ain flourished during this period and many mudbrick buildings were constructed.

The section provides visitors with a unique insight into the country's rich culture and heritage.

The Museum of the Emirates showcases a wide range of photographs documenting the development and establishment of the UAE. These images provide an insight into the country's rich history and culture, as well as the important role that Sheikh Zayed played in its formation.

There is also an array of gifts on display that were given to the late Sheikh by presidents and ambassadors from around the world. One of the most popular items in the museum's collection is a moon rock that was gifted to the UAE by NASA following the historic Apollo 17 mission to the moon. 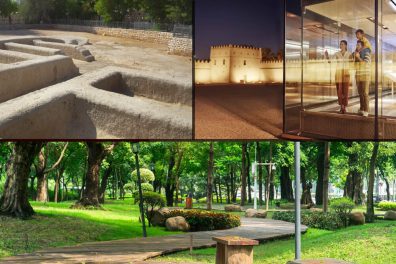